Did Truk live up to expectations?

It can be very difficult to grade a trip, I often find that the most recent trip is the best – ever.

British Columbia last September was amazing, Malin Head before that was fantastic. Fast forward and I was boarding a Boeing 777 for the first leg of a trip to wreck diving Mecca – Truk Lagoon.

Certainly getting to Chuuk or Truk (The names seem interchangeable) is not easy. It is dependant on the final leg from Guam to Chuuk which is operated by United Airlines. My route went Heathrow – Manila – Guam – Chuuk.

The first leg on Philippine Airlines with almost 24hrs in Manila. Part two, Manila – Guam – Chuuk was all on United which means just one check-in for baggage on this leg in a rather chaotic Manila airport.

Despite the opportunity for lost luggage, getting into trouble in Manila or being bumped from a United Airlines flight as they were overbooked everything worked out fine and the 6 of us traveling together arrived safe sound and with all our bags.

Once checked in, as is the norm on any dive trip, there was a rush to set up kit in preparation for the first dive.

I had taken my AP Diving 2020Vision rebreather and was set up with Oxygen & Diluent cylinders plus a tub of Lime. There is a dedicated CCR room for rebreather divers use. 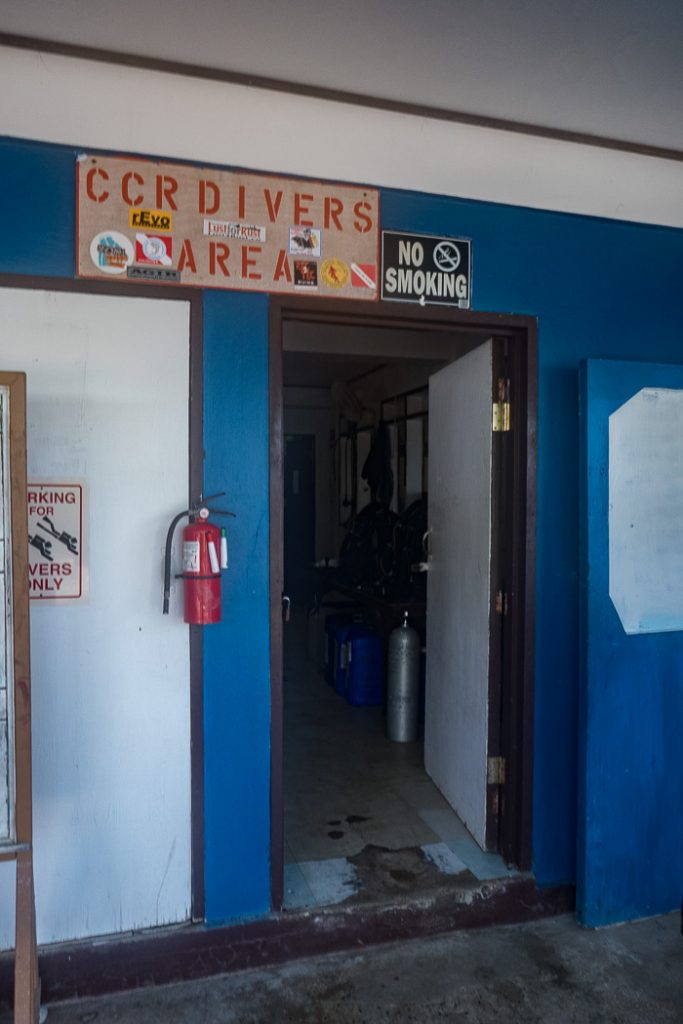 The Dive operation has about 12 covered boats equipped with twin Yamaha 40 engines. Each boat has space for 6 divers(no more). Most wrecks are less than 45minutes away, a few more but most rather less.

During our trip, numbers of divers varied but there was a maximum of about 35-40 divers. This might seem a lot but each boat load of up to 6 divers could choose a different wreck, if the first choice was taken go for something else, there are over 40 wrecks to choose from. Occasionally 2 boats would go to the same wreck, but only with agreement. It was easy to have a wreck to yourself. The centre has a big white board with all the different groups daily destinations marked up, get the choices up early if necessary!

The group was allocated a Dive Guide & boat handler and we were introduced to Jo & Ansa who we would get to know well during the next 12 days.

Daily plans would generally be a morning deep dive followed by lunch then a shallower second, occasionally we would fit in a third. Dives would be 60 – 90 minutes but we could have had longer if we wanted. We had a mixed OC – CC group so those sort of timings worked fairly well for all. Third dives when done were shorter. The guides Jo & Ansa were very easy going and helpful, wanting to make our trip a success.

What of the diving? As the first dive would also be a checkout we chose the Fujikawa Maru one of the most famous & most dived wrecks in Truk Lagoon.

She is a big ship in relatively shallow depths, sea bed being 35m, the bridge superstructure is about 12m. At over 6000 tons and over 400 ft long. Her 6 huge holds contain an assortment of war material, aircraft parts, ammunition & fuel drums.

What is immediately apparent is the state of preservation of the wreck, despite 70+ years worth of coral growth the underlying structure of the wreck is astonishing. Masts are still standing and equipment and artefacts that would have been long gone on a UK wreck are still in place.

In the hold Zero fighter fuselages are jumbled together like they were in a toy box.

In another hold shell cases, more aircraft propeller blades, machine guns and an outboard motor can be seen.

At the bow there is a docking telegraph that has had the coral encrustation cleaned off so the “Let Go Anchor” & “Make Fast” markings (in English despite Japanese manufacture) are clearly seen. Aft of that is the British built 6” gun, thickly encrusted with corals and pointing impotently into the blue.

The breach has similarly been cleaned to show it was built in 1899. Not much use against the attacking American aircraft in 1944.

Visibility on the dive was probably 20-25m but I think it is worth saying that different wrecks can have different viz and it can all be dependent on the state of the tide and the position of the wreck within the lagoon. As a rule of thumb, the outer wrecks (Forth & Sixth fleet anchorages)of the islands have better viz than those more central (Repair & Combined fleet anchorage). The Repair anchorage wrecks the viz was in the 10 – 15m range. Best viz is on a rising tide where the incoming oceanic water makes for the clearest conditions.

I forgot to mention I spotted an eagle ray at the start of the dive and a black tip reef shark a bit later on, it was a spectacular start to the trip and I was eager to discover what other wrecks held in store.

Making the choice of which wreck to dive was not always easy. I would thoroughly recommend getting a copy of Rod Macdonald’s book on Truk Lagoon(you can get it on Amazon here), it is great to have a bit more background history of the Japanese involvement in WW2 as well as a comprehensive description of all the diveable wrecks in the lagoon.

What makes Truk stand apart from other wreck destinations is the ability to make some pretty astonishing wreck penetrations into the engine rooms of several of the ships.

It always felt pretty safe despite on occasion being in areas of absolute darkness. My buddy Andy Aston and I had usually just followed the stairs down then explored the adjacent rooms. Several good torches are all that is needed to be able to find your way back out, just look for the stairs! The depths of the wrecks can be a bit silty but with careful finning it is not much of a problem.

I have put in a selection of images from different wrecks showing what the wreck penetration dives can be like. Where possible we would take a tour around the engine room of most of the wrecks we visited.

They were a selection of triple expansion steam engines, steam turbines and diesel engines.

It was amazing to see all the gauges still in place as well as engine room telegraphs.

Several ships had workshops in their engine rooms with rows of tools ready to sort out engine problems.

There were several standout dives but I think the San Francisco Maru was probably my favourite of the trip.

One of the deeper wrecks in the Forth Fleet Anchorage it lies on a 63m seabed with her bridge in about 45m.

She still carries much of her cargo including HA-GO light battle tanks on her deck, trucks in one of her holds and lots of munitions.

Remains of a steam roller and trucks have also fallen off the wreck & now lie on the white sand seabed.

Combined with the stunning viz in this part of the atoll we have a magnificent shipwreck worthy of multiple visits.

My buddy Andy was for several years a guide in the Red Sea, he has dived the Thistlegorm many times, he felt that as a single WW2 wreck the Thistlegorm has more to offer than any single wreck in Truk. When you consider the quantity of wrecks in Truk along with individual items of interest on different wrecks and not forgetting the aircraft that can be visited then Truk comes into its own, it truly is a wreck divers Mecca.

Any problems? It was wetter & windier than I was expecting, there were about 6 days of torrential & non stop tropical rain, it didn’t affect the diving but it did get a bit trying. Some of the trips out to the wrecks were a touch “sporting”. There is rudimentary internet access at Blue Lagoon, enough to download emails but anything more is very slow. You need to purchase a local SIM card to get any phone reception.

My trip was organised through Diverse Travel who did a fine job putting everything together. Back to my original question it did live up to expectation? Definitely and I would rate it up with the winners as far as trips go. I’ve decided I can’t give a single trip the crown, too many are good, this is one of the best. Would I go again? Most definitely! There are still some wrecks I haven’t dived.

One thought on “Long Distance Truk(ing)”